This woman is wearing a knit hat, striped in colors of the Rastafarian flag.  It was a gift from a woman in Australia, while she was in Australia.  A woman who fed this woman lunch and beers but accepted no payment.  Her listening to the stories she was regaled with was payment enough. 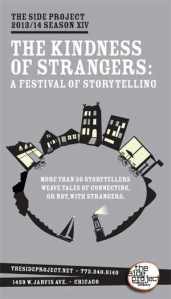 Plus, she would need it while camping in the outback.

She flew to Australia following the demise of a relationship.  Seems it is what she does.  Camping in the Outback.  Hiking in Wales.  Meditating on a mountain outside of Tokyo.

She is standing on a small stage in Rogers Park talking about it.  Coming clean, as it were.

My friend Clover will also be reading and performing a piece .  It is about her mother.  About art school and being a performer.  About helping a man across the street who has fallen and everyone around him just keeps moving as if this hasn’t happened and the universe calls upon her to play the part of his angel.

There is a third.  Eric.  Who will talk about his need to go to a place where his father had been.  The father he didn’t know.  And then he did.  But who he never really knew.  And is now dead.

But right now I’m watching Jennifer.  I know her name because I looked it up in the program, which is black and white.  Folded but not stapled.  And reads, “The Kindness of Strangers: A Festival of Storytelling.”

And then, “A 3-week rotating mix of more than 30 storytellers weaving tales of connecting, or not, with strangers.”  The words encircled by drawings, like a globe – buildings, a boat and a lighthouse, water.

I want to be this woman with a knit hat and a beer-stained hiking map, marked up by pub patrons who laugh each time she says the word “garbage.”  This woman who takes off on serious adventures – by herself – when love goes south.  When the re-bound from the break up proves not to be the antidote to her pain.  Who is standing on this tiny stage telling her story.

I want to be that brave.  To travel alone.  Even though I’ve done it – albeit briefly — and my experience is that solo travel is most satisfying when it is connected to purpose.  And people.  Like my volunteer trips to Rwanda and the South of France.

I want a rebound.  Even though it has been suggested I don’t date.  Even though I have probably been divorced too long for anything to be called a rebound.  And my short-lived dalliances, both emotional and physical, have been painful to the extreme.

Even though my experience of being alone this past year has brought me closer to myself.  My craft.  My writing.  The very thing that might put me on stage.

I am comparing my insides to someones outsides once again.  Devaluing my own experience when confronted with someone seemingly doing what I think I’d like to do.  What I think I should do.

I well up listening to her.  While the details are different, I recognize the story as my own.

I see pieces of my story in Eric’s too.  Reconnecting with a parent who was physically absent for so many years.  His through desertion.  Mine through adoption.  Losing them again.  And what is left.  For him, a ring.  For me, a pair of opera glasses and a too-big mink coat, her name embroidered on the inside, hanging in my closet.

But I do not see myself in Clover’s story.

I’m not even looking, let alone comparing.  It is not that I am not interested.  I am.  I am teary, ass-glued-to-the-seat, riveted.

Maybe it is because I know her story.  Her stories.  She has trusted me with them over the years.

Her mother selling her art work, without her consent, as payment to her therapist.  Lying down in the street in downtown Chicago when the light is turned red.  A classroom performance piece.  The ants that crossed in front of her mattress, on the floor, in the basement of her mother’s friend’s house, in the toniest part of upstate New York.

And I have trusted her with mine.  They are less the same.  But our feelings, and our responses, match perfectly.  This is where we found our “me too’s.”

Like I am just now doing with Jennifer.  With Eric.  Connecting with strangers – who may or may not become more than that.  (Turns out, I have danced with Eric’s girlfriend on and off for years.  I’m pretty sure I’ll see both of them again.)  The place of beginning.

3 thoughts on “Artist Date 45: The (Sometimes) Kindness of Strangers”