Muchas gracias to those who have supported my Go Fund Me campaign, “They Don’t Eat Alone in Spain” — a post-divorce narrative of how 52 Artist Dates healed my heart and pointed me in the direction of my dreams –- and my goal of manifesting blog into book deal. It is a joy to share three more of their stories and how they touched mine.

I am enjoying my first solo holiday since moving to Madrid. A pre-birthday celebration.

I’ve rented a bike. Treated myself to a day at the beach — complete with lounge chair, umbrella, and a massage. And feasted on paella with the friend of a friend, and her family. (A real treat — as my air bnb host has informed me restaurants do not make fresh paella for one. Solo diners have to make do with a ration, cooked up earlier in the day — mostly for tourists who don’t know the difference. Remember … “They Don’t Eat Alone in Spain.”)

It is my last evening here. I’m strolling the beautiful, winding streets when I hear … American! Not English, American.

My head spins around, as it does every time I hear my native “twang.” Except this time I am surprised by a familiar face.

It is Gail Mathis. We met just a few weeks earlier in Madrid. And now she is here, in Valencia.

And here, nearly a year later, supporting my “They Don’t Eat Alone in Spain” campaign.

Thank you, Gail! For your generous donation and for maintaining the connection of chance meetings and serendipity.

I regret I won’t see Gail when we both return to Spain this fall. Our itineraries don’t quite overlap. Plus, I’ll be at writers retreat — with the intention of manifesting a book deal for “They Don’t Eat Alone in Spain.”

The Rocaberti Writers Retreat I will be attending this October in Girona, Spain is paid in full!!

Many thanks to Angie Hubbell for donating the EXACT amount needed to help me achieve this auspicious milestone.

Angie has been a co-creator in my life for as long as I have known her.

We finally met in 2007 (We’d shared a mutual friend and had heard about one another for close to 20 years.) when she hosted my then husband and I, visiting Chicago from California, in hopes of finding a home.

After two days of real estate”touring,” we agreed on a condo we wanted to call our own. Problem was, we weren’t sure if we could afford to.

I still don’t know what kind of voodoo mathematics Angie did … all I recall is her scratching down some numbers on a margarita napkin, and showing us we could.

That same weekend our mortgage broker went AWOL. Again, Angie swooped in with a solution — connecting us with a friend of hers who brokered the deal with speed, kindness and grace.

We lived in that house for four years. Rented it for a few more. And sold it last July — days before I moved to Spain. It was the last piece tying my ex and I to one another.

I left for Madrid less than a week later, truly unencumbered. Truly free to inhabit my life. And to discover “They Don’t Eat Alone in Spain.”

I feel a bit like a political fundraiser penning a “Thanks for your donation … but there’s still work to do” email.

Yesterday I gleefully posted that the Writers Retreat I will be attending in Girona is now paid in full. What I failed to mention is I am still about $1,500 from my “They Don’t Eat Alone in Spain” campaign goal — as was made apparent when a friend called this morning and exclaimed, “You met your goal!” Aww … “Well, a milestone piece of it,” I responded. (Detailed cost breakdown here.)

… but there’s still work to do.

I am a firm believer that each person we meet changes our world in some way — large or small. I also believe that, if we’re lucky, a few people change the way we live in the world.

Christine Frazita is one of those people.

I showed up in her San Francisco office in the mid 1990s, not long after parting ways with my previous psychotherapist — the one who had briefly dated my then boyfriend. And neglected to tell me about it.

Christine’s couch provided both a literal and metaphoric soft place to land. And while she was, and is, kind beyond my personal understanding or ability … she also pushed me to work hard to change the way I saw the world and myself in it.

I remember telling Christine about that then-boyfriend. How he had lived in Paris for a couple of years. How I dreamed of doing something similar, but for a variety of reasons, didn’t believe I could.

Twenty years later, I not only believed I could. I did!

Muchas, muchas gracias, Christine! For your contribution to my “They Don’t Eat Alone in Spain” campaign. And for your help in doing the heavy lifting that got me there. 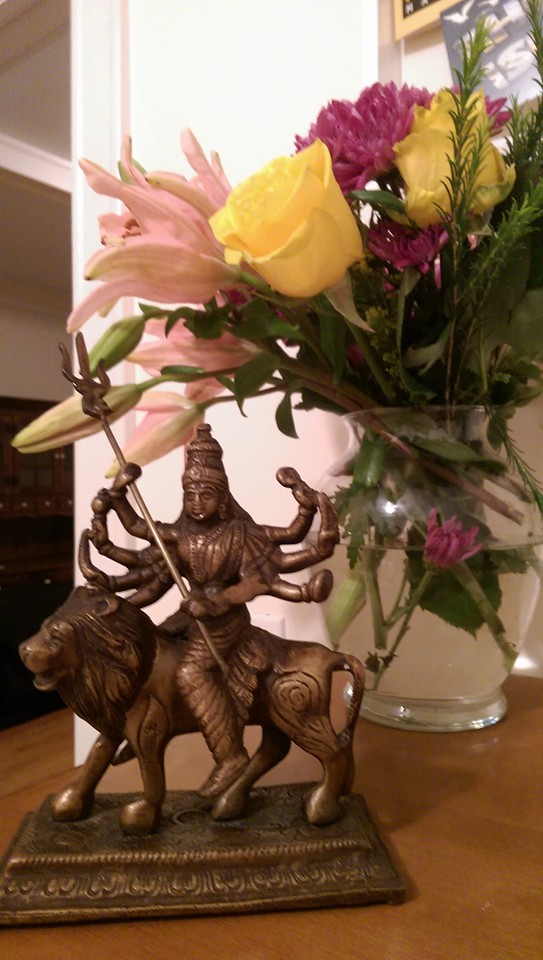 Christine sent me this sculpture of the Hindu Goddess Durga as a wedding gift. She remembered my religious studies professor at university had mentioned a Goddess particularly appropriate for and inside of me — Durga, Goddess of Power and Strength.

Want to know more about “They Don’t Eat Alone in Spain” — how 52 Artist Dates saved my soul after divorce and landed me smack in the middle of my own life — or how to contribute to my Go Fund Me campaign? Click here.

More words of thanks for those who have supported my Go Fund Me campaign, “They Don’t Eat Alone in Spain” — a  happily-ever-after, after divorce story, sans romance –and my dream of manifesting blog into book deal.

Last night I had the privilege of reading my work at Nikki Nigl’s AboutWomen in Chicago.

“I began having experiences instead of talking about them.”

I never know what words will resonate with an audience. This time it was clear, as this quote was posted on Facebook later in the evening.

I’ve talked about publishing a book for a long time. Now I’m ready to have the experience of it. Many thanks to Dana Harmon for her generous contribution, which brings me one step closer … (to) my dream of turning my experiences — my weekly Artist Dates, chronicled at http://www.awanderingjewess.com — into a book about the possibilities of happily going it alone after divorce. 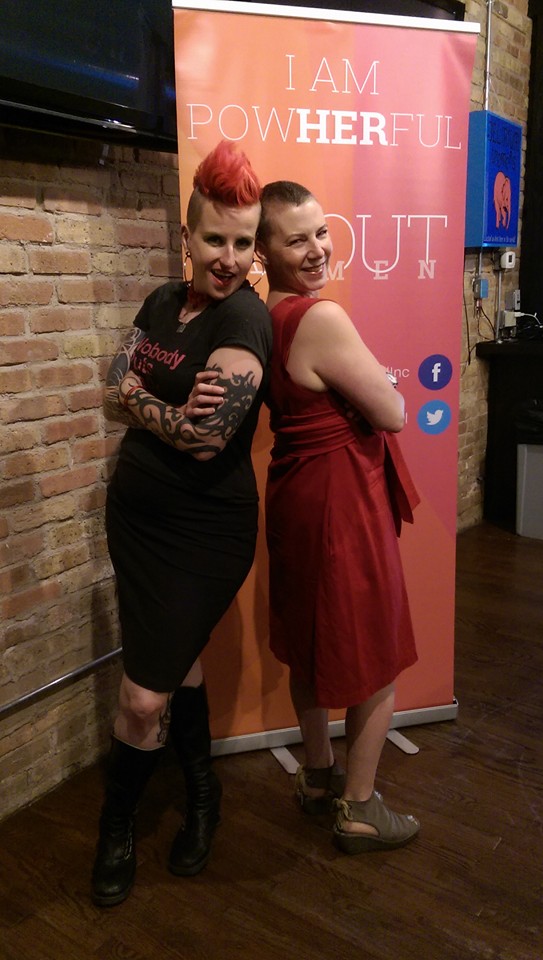 I forget that the universe is busy working on my behalf, even when I’m not working. In fact, sometimes it does its best work when I am at rest …

I was reminded of this truth this afternoon when I (uncharacteristically) sprawled out on the couch, listening to an interview about creativity with writer Elizabeth Gilbert.

I dozed off for about 20 minutes. When I awoke, I was met by a notification of a donation from my dear friend, Nikki Nigl.

Nikki packed 90 percent of my life into two suitcases and two carry-ons nearly one year ago, thus preparing me for my move to Madrid. She picked me up at O’Hare when I returned home 15 days ago. In between, she sent packages with what I couldn’t easily buy in Spain (travel-size toothpaste, Weight Watchers journals) and notes of inspiration. I’m fond of saying “Everyone needs a Nikki Nigl in their life.”

Many thanks Nikki for all that you do … and for taking my “They Don’t Eat Alone in Spain” campaign past the $1,250 mark. The retreat — where I will meet with literary and film professionals to transform my blog into a book — is now half funded. My goal is to have it completely funded ($2,500) when I send the manuscript to my retreat mentor on September 1.

(Notes from Nikki. I “found” these in the pockets of my winter coat … which she sent to me in Madrid.) 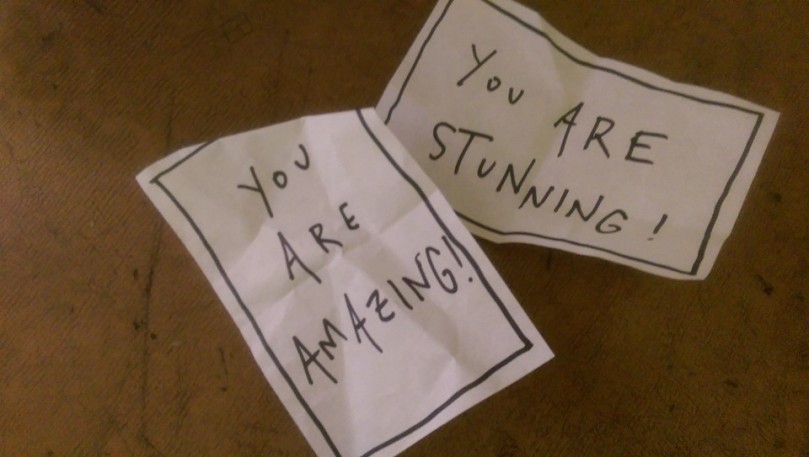 I learned to meditate more than 14 years ago . I brought flowers and fruit as an offering for receiving my mantra. And I remember asking my friend and teacher, Paul Brown, how it was he “made a living” as a meditation teacher.

It sounded ridiculous at the time. It was a hard idea to wrap my head around. Sometimes it still is. And yet, I find it is true in my life too … as evidenced by the success of my “They Don’t Eat Alone in Spain” campaign and Paul’s recent contribution to it. Muchas, muchas gracias a mi amigo y mi profesor.

I believe we attract abundance to us when we do our soul’s work. For me, that work is telling my story — of how I found a happy ending after divorce … even without “getting the guy.” I didn’t see many models for this when my marriage ended … so when romance eluded me I had to forge my own path. Little did I know it would be such a rich and satisfying one. One that would lead me back to myself. The self I had lost along the way without even knowing it.

(Paul and I in Golden Gate Park … post mediation glow.) 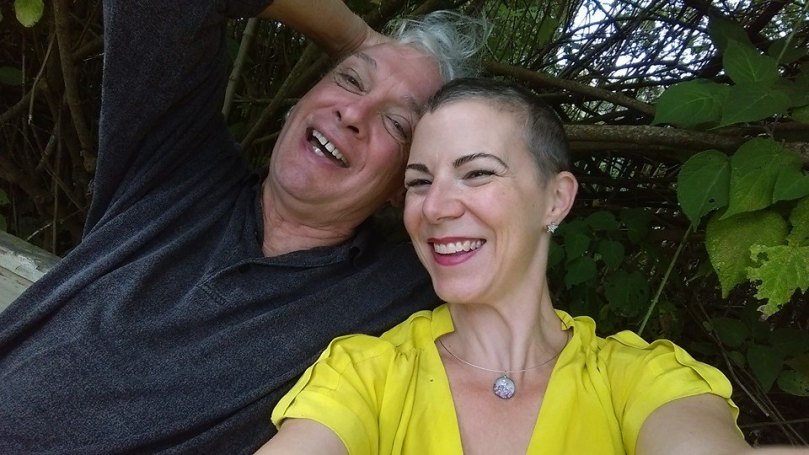 Want to know more about “They Don’t Eat Alone in Spain” — how 52 Artist Dates saved my soul after divorce and landed me smack in the middle of my own life — or how to contribute to my Go Fund Me campaign? Click here.