But I also don’t recall seeing a posting at the entry of an exhibit, a warning that explicit content lay ahead, possibly unsuitable for children.

I returned to the Art Institute of Chicago for “Undressed: The Fashion of Privacy,” an adjunct exhibit to the newly opened “Impressionism, Fashion and Modernity,” which I saw last week – Artist Date 28.

I liked the name.  It reminded me of my strong belief in really good underwear – or none at all, which my friend Clover reminded me of when she was visiting last week.  She came out of the bathroom smiling.

“Right…really good underwear,” she said, referring to the lacy bits drying over the shower rod and towel bars.  We giggled knowingly.

There is very little underwear in “Undressed” – but a lot of vulnerable nakedness.

They remind me of something Geneen Roth wrote in her book When You Eat at the Refrigerator, Pull Up a Chair or 50 Ways to Feel Gorgeous and Happy (When You Feel Anything But).  Suggestion 25: Stare at Normal Women’s Bodies (Normal Does Not Include Models, Actresses, and Elite Athletes).

I’ve done this at women’s spas.  Sitting in the dry sauna, noticing dimpled thighs and buttocks.  Six-pack abs and round bellies – some large and pendulous, obscuring any hint of pubic hair.  Breast implants perched nearly at shoulder height.  Mastectomies.  Single and double, with and without reconstruction.

Pierced nipples.  Pierced navels.   C-section scars.  My own scars.  Two faded purple lines running vertically from my areolas to the folds under my breasts.

Sometimes I forget what real bodies look like.  How they move in the world.  I am reminded.

Degas’ “The Tub.”  A bronze sculpture of a woman submerged in water, her leg outstretched, washing her foot.

Klimt’s “Seated Woman from The Front with Hat, Face Hooded.”  Wispy lines of pastel pencil.  Her legs are spread and her hands are between them.  A large hat lazily tilted over her face. 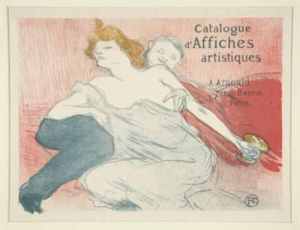 Lautrec’s ”Woman in Bed – Waking.”  She is turned toward me, one sleepy eye just opening.  Sexy.  Soft.  So different from his prostitute in “Debauchery” –a hazy, colored drawing of a woman being groped from behind.  His hands over her breasts.  Her arm extended, a martini-shaped glass dangling from her hand.

There are men too.

Delacroix’s “Standing Academic Male Nude.”  Chiseled.  Holding a stick, he appears to be rapping it onto his flat hand –a threatening gesture.  As if preparing to punish some innocent, or not so innocent.

As if HE is the general Rops’ alludes to in “For You, General” – an old woman holding a younger one over her knee, her buttocks exposed, an offering.  The girl’s bunched up skirt covers her face.  The old woman is smiling.

Munch’s “Boys Bathing 1896.”  Like tadpoles.  “Boys Bathing 1899.”  Like many letter X’s, like many little frogs.  “Men Bathing.”  Like figures from a Hatch Show Print poster –iconic wood-block images made in Nashville, announcing the Grand Ole Opry and Johnny Cash.

There are children.  Rafaelli’s “Germaine At Her Toilette.”  A young girl in a white dressing gown, her black tights wrinkled and baggy at the knees.  Even religious icons.  Munch’s “Madonna,” like an album cover or t-shirt from a 70’s rock band.  Bands of colors tracing her image.  And who is the small character in the bottom left corner, seemingly questioning all of this? 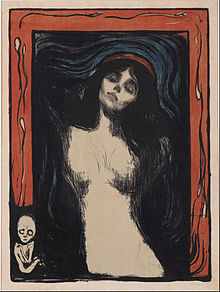 I peer deeply into black and white woodcuts.  I love their simplicity, their precision.  And yet, I am not quite sure what I see.

I come close and step away and come close again.  It reminds me of the drawings on the back page of children’s magazines.  The ones that ask “Do you see the old woman or the young woman?”  Where once you see one, it is impossible to see the other.

It is the same with Vuillard’s “The Birth of Annette.”  Finally, after many minutes, I see the baby’s head.

Perhaps that is the point.  The experience of “Undressed,” of being undressed, is so intimate, so private.  I am an invited voyeur.  It is not mine to fully know. 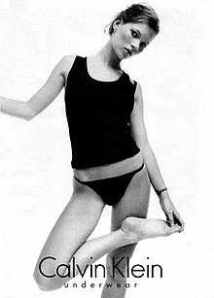 About this time last year, my friend Joanne told me she had two style icons – me and Kate Moss.  I was surprised and tickled.  But mostly tickled.

I remember  what I was wearing that day.  A tight pink and white striped “French sailor” t-shirt from Old Navy, with buttons along the boat neck.  Too loose, Army-green cigarette pants from Target, purchased prior to my ex asking me for a divorce – before the weight slipped off of me, seemingly overnight.  A thin, woven belt, and my yellow peep-toe wedges with ankle straps.

I felt like a page torn from Glamour –“Great Looks for less than $50,” or something like that.  Minus the shoes.  The shoes would put me “over budget.”

The shoes always put me over budget.

“What calls for the most care in a woman’s costume is unquestionably the foot gear and the gloves.”

The words are stenciled on a wall at the Art Institute of Chicago, along with numerous other pithy statements about dress.  I am here for a member lecture and pre-viewing of “Impressionism, Fashion, and Modernity” – Artist Date 28.

Sometimes I feel light, superficial, because I am delighted by statements like Joanne’s.  I feel that it should not matter.

And yet, I am at a show that has toured the Metropolitan Museum of Art in New York and the Musee d’Orsay in Paris before landing in Chicago, a show that is focused on fashion.  Earlier this year I saw another, “Inspiring Beauty: 50 Years of Ebony Fashion Fair,” at the Chicago History Museum.

I consider that, perhaps, how I choose to cover my body might not be a simple matter of practicalities and aesthetics.  That fashion – how we dress ourselves, individually and as a culture – is in fact, a statement of sorts.  A reflection of time, mood, politics.  Think hemlines rising as the economy upticks.

Or, as Gloria Groom, the show’s curator says in her lecture, “clothing is not fashion.”

The exhibit is bursting with paintings and sketches.  Advertising, bits of clothing and accessories.   Bustles, corsets, shoes.  Costumes for walking the boulevards of Paris.  For going to the sea.

“As fashion was an integral part of Paris’ character, some places – the boulevard, parks, racetracks and theatres – were constructed with the idea of it’s well-dressed pubic in mind.”

Groom ends her lecture with a joke, a “warning.”  That those experiencing a bad hair day, clothing day, face day, might do well to avoid the exhibit.  That mirrors and reflective surfaces abound.

I am standing in front of a collection of hats.  Fifty or more.  jeweled.  Feathered.  Contained in a single square of plexiglass spanning floor to ceiling.  I see myself admiring the millinery.  Recognizing one that reminds me of the hat I wore at my wedding.  I mention this to the woman standing next to me.  She asks me about it.

It is made of tightly woven straw, pinned up into corners, decorated with ribbon flowers and glass fruit.  I had to have it.

I do not mention I am divorced.  It does not feel germane.   We are talking about hats.  This is progress. 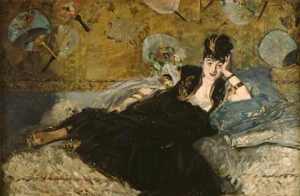 My marital status creeps in later, standing in front of an Edouard Manet painting of Nina de Callais, called “Lady with Fans.”  She is lying on her side, looking straight into the camera.  If there were a camera.  Her eyes are big, dark, open.

She is dressed in black, but she is not mourning.  She is wearing jewelry.  If she were in mourning she would not be, Groom explains.  Groom adds that de Callais is divorced.  That perhaps she is “re-baiting the trap.”

The placard next to the painting notes that de Callais was known for hosting salons of writers and artists.

A woman next to me says, to no one in particular, “She is ugly.”  I do not agree.  “Don’t you think she looks and sounds like fun?” I say.

“Perhaps.  But she is ugly.  At least she is painted that way.”

I say nothing.  Like my friend Julie says, “You can’t argue with crazy.”

I wonder if I am re-baiting the trap.  Maybe.  Not long after I moved back to town, my friend Tori commented that I dressed differently – sexier, more body-conscious.  I wasn’t conscious of it.  But now I am.

“A woman in a corset is a lie, a falsehood, a fiction.  But for us, fiction is better than reality.”

I think of a party I attended in San Francisco in the mid- 1990s.  There is a poster of the Dallas Cowboy Cheerleaders, circa 1976, hung in the bathroom.  By today’s standards, and even those of almost 20 years ago, the women – once considered the pinnacle  of beauty in America – would be seen as flabby, soft.  Their breasts, saggy.  Their thighs, heavy.

Like the photograph of Marilyn Monroe that was recently popular on Facebook.  She’s in a yellow bikini. Boy short bottoms. Tie halter top (I covet this suit.).  She is reclining.  Folds of skin naturally line up across her belly in horizontal rows.

I have folds across my belly.

I am acutely aware of the phenomenon of Photoshop.  Of airbrushing.  That no celebrity would willingly allow this photograph to surface.  But that it might show up in The Star or The Inquirer, with a headline like “Monroe Hits Maximum Density.”

It is a little after 4.  I have given myself an hour to tour the exhibit.  It is not long enough.  I have somewhere to be.

I want to stay and stare at the woman in the Frederic Bazille family reunion painting.  The one in the polka-dot dress staring out at me.  Her face is sweet.  It is shaped like mine.

I want to take off my shoes and run my feet through the fake grass covering the floor in the Plein Air (open air) room. 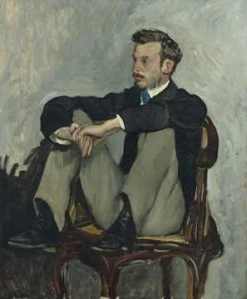 I want to lean into Bazille’s portrait of Pierre-Auguste Renoir.  Hiked up on a chair, his arms wrapped around his bent knees.   He is bearded.  My type.

I want to scroll through Henri Somm’s sketchbook, digitally brought to life.

I want to see the related exhibits: “Undressed: The Fashion of Privacy” and “Fashion Plates: 19th-Century Fashion Illustrations.”

I return home and there is a message from my friend Joanne.  A different Joanne.  She was at the lecture too.  She saw me.  I saw her.  But we didn’t see each other seeing one another.  She says, “You looked lovely in that dress.”

I wonder what this dress – its halter-style, plunging neckline and flirty skirt, covered in large red and navy flowers – says.  Is it a sign of optimism, worn the day before the Supreme Court overturns the Defense of Marriage Act?  Or is it nothing more than a response to a sticky, summer day in Chicago?