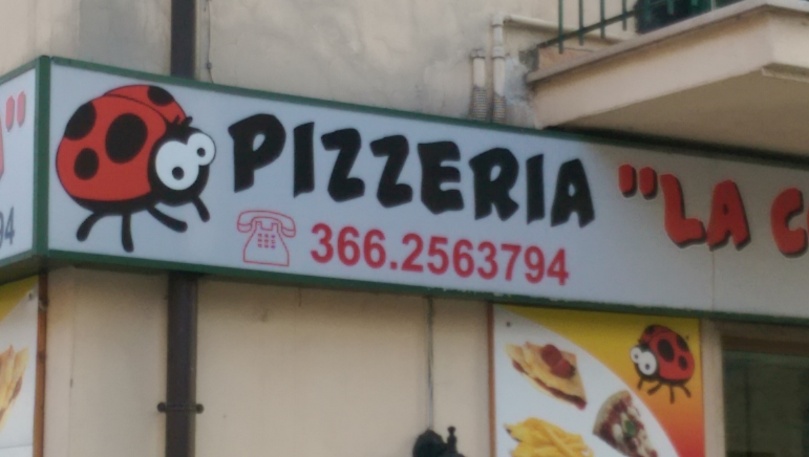 My friend Kerry told me to look for ladybugs while I was in Italy.

He was referring to the part of the movie, Under the Tuscan Sun, when the sexy, older ex-pat from London tells Frances, a recently divorced American reinventing herself in Italy, that looking for love is like looking for ladybugs. That when she was a child, she would spend hours looking for them, eventually tiring and falling asleep in the grass.  And when she awoke she would find herself covered in them.

I wasn’t sure I was looking for love in Italy. Or even a romance – although I assured him and others that my heart was open to the possibility.  However, as the days to my departure date grew more near, I was more than certain I was here to do something.

I saw my first ladybug when I arrived in Umbria, 24 hours after arriving in Rome.

After I nearly took the wrong bus from Arezzo to Cita de Castello – twice – and a young man named Leonardo approached me, offering help in English. After we spoke for nearly 45 minutes – talking about writing and language and being “black sheep” – and friending one another on Facebook.

After Giulia and Elide – my contacts for the AltroCioccolato, the “other” chocolate festival I came to volunteer for – picked me up at the bus station. And after bringing me to Roberto’s house – one of the festival’s founders – where I sat in the sun while he plied me with buffalo mozzarella, tomatoes – shiny with olive oil, and espresso.

It was a few hours later, driving to pick up groceries at a biological food co-op. A large ladybug graced a sign announcing that our destination, The Happy Worm, lay ahead.

The next day, I saw three more. One embellished a pizza parlor sign.  Another, actually a mess of them, covered a car steering wheel.

The final one landed on another of the volunteers – Duncan, the youngest of the group and the only other American. He asked me if I wanted it, knowing nothing of Kerry and our conversation.  I told him I did.  He put his arm next the mine and the ladybug crawled over to me without any prodding.  And refused to leave.

That night, I found myself in the city’s hospital. What had merely been a health nuisance while I was in the states had escalated enough for me to make contact with healthcare professionals back home at .99 a minute.

I was fairly certain I would have difficulty getting a live voice at Northwestern Hospital, so I called my physical therapist to ask her advice. She told me to call my doctor.  That she wasn’t comfortable giving advice on this matter.  When I told her I didn’t have an internet connection, she looked up the number for me.

Several holds, disconnects and phone calls later, I was advised by a medical assistant to seek attention.

I knocked on Giulia’s door and told her I needed to go to the hospital. As she dressed, my roommate Ingrid, from the UK, offered to join us for moral support.  In the piazza at midnight in this sleepy village Giulia – a native of Italy – asked around for a cab.  A stranger offered to drive us, dropping us off at the hospital and wishing us buona fortuna — good luck in Italian.

Ninety minutes later I was warmly assured by a doctor that I was in fact, ok.  I received a bill for 25 euros which I was instructed to pay the next day.  And Elide – whom Giulia had called – drove us home.

Earlier that evening, in the hospital, I broke down in tears. Overwhelmed.  Afraid.  And aware that my ex-husband, a doctor – was no longer “my person.”  That I was “alone.”  Giulia responded, wrapping her arms around me and saying, “We are your family.”

And I realized that ladybugs weren’t just on signs and steering wheels and the arms of volunteers. That ladybugs – that love – followed me everywhere.  All the way to Italy.  To Umbria.  Just south of the Tuscan sun.

I only recently bought my plane ticket, and just last week decided exactly where I will spend the days following my volunteer work in Umbria. I have not booked a single night at a hotel, pensione, hostel or airbnb.

This is highly unusual for me.

By now I would have secured a room for all of my nights, and outlined a rough itinerary of my days – making certain I knew when each museum closed.  I learned this from my friend Tim, who saved the Louvre for his last day in Paris, not realizing it closed on Tuesdays.  He has lovely pictures of the outside.

I would have purchased my train tickets and made copies of my passport.  My travel books would be dog-eared and yellowed with highlighter.

I have done none of this.  I’m not sure why.

And so I find myself tucked into a big chair in the back of the Book Cellar, pouring over travel guides – more out of necessity than anything.  Fodors.  Rough Guide.  Lonely Planet.  Thick books on the whole of Italy.  Thinner versions on Rome, Florence and Tuscany.  Artist Date 86.

I recall my first travels overseas – press trips to Germany and Israel.  I was in my 20s and had dreamed of traveling abroad.  Everything was handled for me.  Flights.  Hotel.  Itinerary.  And yet, I sat at San Francisco International Airport before each trip – terrified.

Flying out of SFO in 1999 to Spain – my first overseas trip with my then boyfriend, now ex-husband — felt wholly different.  I wasn’t alone.

One Saturday morning we somewhat impulsively bid on Priceline tickets to Madrid.  By afternoon, we were sprawled out on the floor of Borders Books – leaving a few hours later with copies of Frommers – Europe on $100 a day and Madrid, Barcelona and Seville.

We traveled overseas together several times over the next few years – me carefully crafting an itinerary each time.   Yet, a part of me longed to travel alone, as so many of my friends had done after college.

At the time, I feel too old to throw a rucksack on my back, sleep in hostels and shower in train stations.  I find a trip volunteering in the south of France, building walls as part of an architectural restoration project.

I spend a few days in Paris by myself when I arrive.  It does not feel glamorous and exciting as I had imagined.  It feels scary and lonely.  I wander the streets alone, slightly drunk and call my then husband — crying.  A few days later I join my team in Avignon.  Surrounded by volunteers from around the word, ranging in age from 21 to 73, I feel joyous and free.  I have found my place, my role.  I am the friendly American who drinks too much and gives massages.

Eight years later, (I will turn 45 in Italy) I do not drink anymore.  I do not have a husband anymore.  These things that I leaned into ceased to serve me long ago.  This time, this trip, I must lean into myself.  My hesitation in planning suddenly makes sense.  I am afraid.

And yet, I have a plan, a purpose – I am again joining volunteers from around the globe.  This time, at the Altrocioccolato Festival – known as the “other chocolate festival” – outside of Perugia.  This time, my alone time is on the back-end of the trip – and I will have a better sense of place.  This time I have people, “waiting” for me in church basements.  People who also used to drink too much but don’t anymore – people like me.

My friend Pam says I will go to Italy and meet a boy on a scooter and never come home.  She tells me that I am brave.  That she doesn’t know anyone else our age doing what I am doing – traveling, alone.  I do not feel brave.

And I remember what I’ve been told, that bravery isn’t the absence of fear, it is walking through it anyway.

Or perhaps flying through it – direct from Chicago to Rome on Alitalia.  Or riding a scooter through it – an Italian boy in front, and chocolate in my pocket.