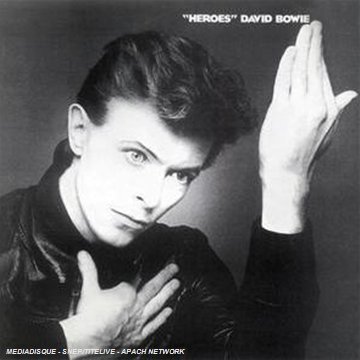 I’ve been listening to David Bowie a lot lately.

It’s a bit like returning from travels abroad and insisting on eating as I did while away.  Toasted bread rubbed with fresh garlic and tomato following a trip to Spain.  Cucumber-tomato salad for breakfast after a press trip to Israel.  And most recently, coffee made in a stove-top moka upon returning from Italy.  Each time, holding on to that place, that experience, for as long as I am able.

Except Bowie takes me back to a place and experience I mostly do not care to hold on to — high school.  It begins at the Museum of Contemporary Art, the David Bowie IS show — Artist Date 93.  I am transported.

I am 14 and wearing a baseball jersey from the Serious Moonlight tour.  My cousin from Los Angeles has turned me on to Bowie.  The same way he turned me on to weed, the Culture Club and all things French.  He is cool with bleached-blonde hair and skinny ties that match his skinny body.  He lights my cigarettes, walks on curb side of the sidewalk and stands up when I leave the table.  He is my ideal man.  He has been all of my life, and although I don’t yet know it, he will continue to be — long after I stop smoking weed, and Boy George gets sober too.

I am rifling through bins of used albums at Sam’s Jams in Ferndale, Michigan and find ChangesOneBowie.  Soon I will commit the words of each song to memory.  I will know them like I know my own name.  My hair is a pinky-red, spiky and sticky with Aqua-Net Extra Hold.  I am wearing iridescent blue lipstick, a plaid pleated skirt from the Salvation Army that doesn’t quite zip all the way up and a Cranbrook Lacrosse sweatshirt  — hooded with a torn front pocket — that I “borrowed” from a boy named Simon, who I met just once and never saw again.

I am in Ann Arbor visiting my friend Stacey.  We have taken the bus from her house to the University of Michigan campus.  There are no buses in suburban Detroit, where I live, save for a yellow school bus.  I feel urban and cool.  We are watching The Man Who Fell to Earth on a big screen.  It is terrible but we love it anyway.  Stacey has also seen The Hunger and Merry Christmas, Mr. Lawrence.  I have not.  She is clearly the bigger fan.

I am sitting on multi-hued blue shag carpeting in my bedroom holding the cover of Heroes in my hands — singing every word printed on the sleeve.  “And you, you can be mean.  And I, I’ll drink all the time.”  Little do I know how true these words will turn out to be.  A few years later it is Tonight.  Blue Jean and a cover of Brian Wilson’s God Only Knows passing my lips.

I am on the cold sidewalk outside of Record Outlet with my best friend A.  We are here overnight, in line for tickets to the Glass Spider tour which go on sale tomorrow.  I cannot believe my mother has agreed to this.

I cannot believe how long it has been since I have talked to A.  Nearly five years.  That the last thing she said to me was, “Keep them.  They look better on you anyway,” referring to the sunglasses I borrowed and that were still tucked in my bag as I drove away from her apartment.  I no longer have them.

I cannot believe I left Heroes and Tonight in Seattle with my ex-husband, along with The Specials, Thriller and the original soundtrack from Hair.

I cannot believe I remember Simon’s name, how long I held on to that sweatshirt, or that I am waxing nostalgic about high school.

In 1990, David Bowie played his greatest hits on tour “a final time.”  “…it gave me an immense sense of freedom, to feel that I couldn’t rely on any of those things. It’s like I’m approaching it all from the ground up now.”  In 1996 he resurrected Heroes onstage.

There is an IS in hIStory — as well as a story.

My friend Cynthia has a God Can.  “Because God can,” she says.

I’m not quite that optimistic.

I keep a God Box, instead – wooden and carved.  From Poland, I think.  My friend Patsy gave it to my ex and I as a wedding gift, stuffed with cards on which our guests might write their wishes for us.

I’ve used it as my God Box for a while now.  Long before my ex and I called it quits.

We moved the wishes into the bottom of a cherry-wood box holding black and white photographs of our big day.  Another gift from another friend.  I think I tossed the wishes in the recycle bin when I left Seattle a year and a half ago, but I’m not entirely certain.

Over the years I’ve stuffed the God Box with dreams, wishes and, perhaps most importantly, people and situations over which I have no control.  Which is pretty much everything and everyone…but in this case, those that caused me pain, anxiety, obsession.

Slips of paper and folded-over sticky notes with names.  Occasionally a few details.

My birth mother – she would have jumped into my skin if I would have let her.  In the early days of our reunion, she would call so often I didn’t have a chance to call back.

My mad crush in marriage – the one who bought me a whole smoked-salmon on my 39th birthday and nodded knowingly to seemingly every word I said.  My guru – the man who held space for everything that poured out of me.  Who saw me, was charmed by me, and knew how to hold a boundary.

I desperately wanted to keep each of them.  For each to fall into his or her proper place in my life.  That was my prayer.  To hold them near.  Available.  But without the pain of longing and attachment.

The Southern Svengali.  The man/boy who swept me off of my feet when my birth mom was dying in Charleston.  My divorce buddy – the one who spent long, intimate hours on the phone with me every night but insisted he did not have romantic feelings for me.

Orders to the universe.  For my condo, my apartment, my office.  Notes for a workshop I have yet to conduct.  Questions.  Who would drive back with me from Seattle to Chicago?  A dollar bill.   A prayer for prosperity.

I opened up the god box the other day and put a new slip of paper in it.

The name of a man 700 miles away.  Last week I told him I could no longer ponder the possibilities of a romantic relationship with him.   That he wasn’t available enough to me.  And I was no longer available for the knot in my stomach I called uncertainty.

That pain moved from my stomach to my heart.  I miss him.   I miss my heart leaping each time he calls or messages or just comments on my Facebook status – as if to say, “I see you.  I am here.”

I wonder, will we be friends like we promised?  (I hope so.  We adore one another.)  But how?  How will he fall into his proper place in my life?While the box was open, I took out the mess of slips inside and read them.  I saw that most of these things had come to pass.  Had worked themselves out without my doing much of anything, other than writing words on slips of paper and stuffing them into a box.  And occasionally twisting, which I’ve learned is not essential to the process.

Most.  But some remained.  Unresolved.  Insistent questions about how I will support myself.  When, where and with whom I will have my next relationship, romantic encounter, date, sex, kiss.  Words cut out from a magazine, “dreams do come true…”  I left them in the box, along with the newest addition.

I’m not sure what to do with those that have come to pass.  Do I keep them as a reminder that things change — with or without me?  That new loves, losses and worries displace the old ones.  That more often than not, I receive some sort of version of what I want? Or do I burn them — as a prayer and an offering?

Meanwhile, there is a little more space in my God Box — room for my work, money and romantic possibilities to grow.  Room for God to work on them.  Room for me to act as if I believe that God is working on them — which is me doing my work.  Writing rather than worrying.  Right now.